When you hibernate, all of that RAM is copied to the hibernation file and the full hibernated state must remain consistent between reboots. If even a single byte of data changes on the hard drive between the time the hibernation state is saved and when it’s resumed, then the state is no longer consistent and the entire hibernation file is considered invalid. To act any differently would be as if two different operating systems had the volume mounted at the same time. They two would disagree about the condition of the filesystem and would walk all over each others’ accounting of it, causing severe filesystem corruption. This is why cluster storage file systems used in corporate SAN networks use a file system that is designed for this purpose. It’s just not possible with NTFS.

Even if you take an offline block-level backup of a hibernated system and restored it to an identical drive, it would still invalidate the hibernation state because the hardware GUID of the drive will have changed and that is also part of the state data.

The only exception to this rule is the HORM ( Hibernate Once, Resume Many) feature of Microsoft’s Enhanced Write Filter (EWF). This feature is only available on Windows Embedded versions and the Enterprise version of Windows 10. This allows you to hibernate the system once and resume from that hibernated state as many times as you want. The caveat with that feature, however, is that any changes made to the file system are silently redirected entirely to a RAM disk and are dumped every time the system is powered off, effectively making the whole filesystem read-only after that point.

If you want to hibernate and use a different OS while Windows is hibernated you must not put the Windows bootloader first.

If the Windows bootloader is first, the very first thing it does before showing the menu is check for a hibernated OS. If a hibernated OS is found, it will boot into it automatically and will not show you a menu to choose boot options from. If you force the menu (i.e. F8), the hibernation data will be deleted.

Now if GRUB is the MBR boot menu and is configured to chainload BOOTMGR or boot into Linux, you can hibernate Windows and boot into Linux - but if you mount the NTFS partition, most likely your hibernation will be lost (detected as corrupted). Basically, if you hibernate a machine, you must not touch any volumes that were mounted on that machine (i.e. any FAT32 or NTFS partitions assigned a drive letter in the hibernated OS).

Ridiculously important note: In the event that you mount (say, in Linux) a Windows partition while Windows is hibernated and you are unlucky enough that when you’re done with Linux and attempt to reboot into Windows, Windows does resume from hibernation (instead of erroring out, throwing away hibernation data and attempting a normal boot), you will most likely suffer catastrophic data loss to all Windows partitions as all filesystem-related structures will be out-of-sync between what Windows has loaded in the memory and what’s actually written on the disk.

Other than that, there’s no problem. Just install Windows, Ubuntu, and Fedora. Make sure the latter do not automatically mount Windows’ drives on startup, ensure GRUB is the main bootloader, and you should be able to do what you want. 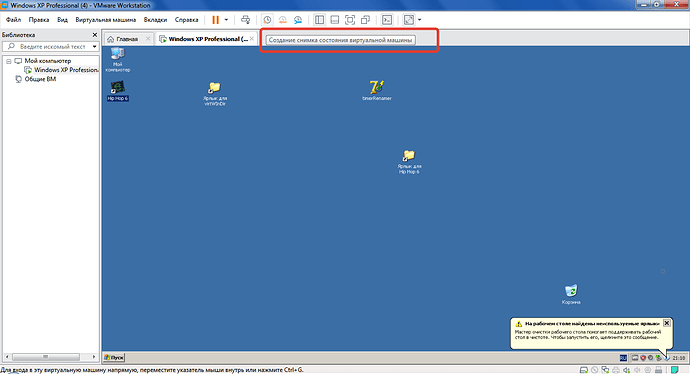 The snapshot captures the entire state of the virtual machine at the time you take the snapshot. This includes: